Cut 75 Percent Off Your Electric Bill 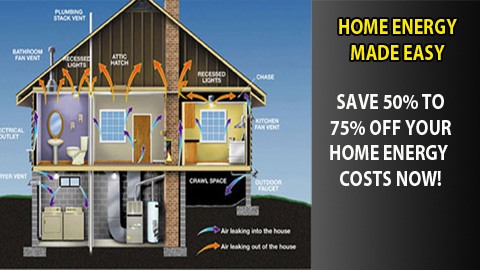 100's of people are saving money and learning the best way to beat the utilities at their own game. You can too!

The quickest, easiest method to have a back-up supply of energy now is to develop your own a generator/battery system.

This is a lot easier than you think. Most modern day generators for homes are very energy efficient compared to yesteryear. I’m not going to go into a lot of detail about this today, other than to give you an overview. I’ll devote many lessons to this later. “But wouldn’t I be contributing to global warming running an inefficient petrol-consuming generator?”

Not necessarily and not as much as you think.

To understand this you need to understand about the efficiency of fossil fuel power plants. They are about 40% efficient on average. Coal is about 35% efficient and gas fired is about 50-60% efficient. Doesn’t sound like great numbers, do they? They aren’t.

This means that only 40% of the fuel used is turned directly into electricity. 60% of the energy is wasted. Traditional electricity generating plants work by heating water to produce steam and then the steam is used to turn a turbine which is hooked to a generator to produce AC electricity. They are however, looking at new ways of burning the fuel directly in a gas turbine to produce electricity.

Then using the heat generated in that process to make electricity the old way is much more efficient.

These new CHP (combined heat and power) systems are about 75-80% efficient, but they are not in widespread use yet.

There is also a loss of 7% to consider when the electricity is transported to your home.

So, right now, you are looking at about 33% efficiency in buying electricity the conventional way or directly from a utility company.

​Home ​diesel generators for homes are about 38% efficient.

If you also use the heat generated by the system to heat your water or home, then it becomes 88% efficient.

You will lose some energy in the conversion from DC to AC so the your efficiency ends up being around 75%. That's a whole lot better than 33% and for all you renewable energy fans out there, that means more energy from less fuel burned. Generators for homes running on gas, propane, or natural gas would be about 62% efficient if it co-generated heat and electricity.

In a nutshell, the “environmental footprint” of running your own energy system, even by diesel generator for homes, is far more efficient, and cleaner, than the energy you’re now buying.

So if solar or wind energy systems is not something that is feasible for you, for whatever the reason, then diesel generator based systems are much more efficient and green than conventional electricity generating plants. In its most basic form you’ll need…

· A generator is going to produce power and

· A transfer switch to control the usage

· A subpanel to run select equipment.

This is an oversimplification. But it’ll do to illustrate the point. There are literally hundreds of different configurations, for every possible situation. If you simply want a system you can use in the even of an emergency, than you even do without the batteries and inverter.

We are still not talking a very expensive system. Maybe $2000 USD total, and it’s more than possible using old/used equipment to get it much less than that. 1.) The home generator can be set up to automatically start during high load or low battery conditions or in any situation you wish. (Automatic start-up in the event of power failure, for example)

2) This transfer switch can be optionally set to automatically transfer power directly from the generator to the main breaker panel during high load times. Of course you also want to be charging the battery bank whenever your generator is running.

4) The inverter requires 24 volt input, so the battery bank could be two rows of batteries hooked up in parallel and then just hook the two rows up in series to get the 24 volts.

5) The main breaker panel can operate heavy load systems like your air conditioner, electric heating, electric stove, heat pump, electric water heater, or electric dryer. Or these systems can run directly off the generator. Also, the excess power can be “net metered” back to the electric company.

This panel is hooked directly to the inverter. This will prevent overloading of the inverter with too many high load systems.

7) Note that power is still supplied from the electric meter to both breaker panels in case your system goes down. Naturally there would be a switch (not shown) to switch back to grid power when sunlight is not available.

Because the peak operating times for wind and solar systems occur at different times of the day and year, hybrid systems are more likely to produce power when you need it.

​Home generators: Many hybrid systems are stand-alone systems, which operate "off-grid"—not connected to an electricity distribution system. For the times when neither the wind nor the solar system are producing, most hybrid systems provide power through batteries and/or an engine generator powered by conventional fuels, such as diesel. If the batteries run low, the engine generator can provide power and recharge the batteries.

Adding an home engine generator makes the system more complex, but modern electronic controllers can operate these systems automatically. An engine generator can also reduce the size of the other components needed for the system. Keep in mind that the storage capacity must be large enough to supply electrical needs during non-charging periods.

Battery banks are typically sized to supply the electric load for one to three days.