Off Grid Meaning - Off Grid Living
0 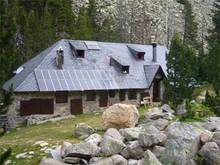 ​Off The Grid Meaning

I remember the first time someone asked us ' What does Off The Grid mean to you?'

The words did not come easy... the obvious non-connection to the grid always comes to mind, but there was (and is) so much more to it.

Then came the question, after a few years when the off grid movement caught on a bit , 'what does living off the grid mean to you?'

But I will give it a go. Then I will ask that you do the same, with your comments.

Earlier I used the word 'evolve' and that is truly what happened in our own case and in the case of others. Our life has changed, evolved if you will into a true adventure in pioneer living, homesteading, and of course off grid living.

It is all the same to us really. We never saw ourselves as pioneers in the true 'land settler' sense of the word, but no one in recent history had ever lived where we do now. That makes us homesteaders as well I guess.

Even our definition of off grid living has changed since we began. We had no idea that there were people out there who saw it as ' a form of hiding from the authorities, a way to drop off the grid, but you hear it in movies and even hear people talk that way.

Our definition does not really look at it that way, to hide, to leave society, to not contribute to the good.

In its basic sense it encompasses a true pioneer spirit of diy, do it yourself, being free from debt, status, greed and envy. Truly doing your best to provide for the needs of yourself and your family, using the resources that you have on hand, including renewable energy.

That may seem like a mouthful of hookie (toned it down for the kiddies there), but in its truest sense it is about living a simple life, a life that is based on frugal living, living off the land and providing for yourself.

A complete lack of dependency if you will, for it is really about independence. Declaring your independence from first the power grid, but also enhancing your life with fresh vegetables, renewable building materials and much more.

When Jane and I finally broke free of our electric bill (she called it a second mortgage each month) it was truly liberating. Perhaps not 'burn your bra' liberating (Jane's comment there) but a real liberation for our family.

We had finally struck out on our own and were free, at least from one dependent who sucked the life out of our budget, and ourselves in the end.

After living off the grid for 16 years now we can confidently say that if we had to narrow it down to what it means to us in one word it would be... time.

There is real joy in sitting in the garden on a Tuesday afternoon having a cold beer after finishing up the garden work, while the rest of the world waits till 5.

Don't get me wrong though, we worked damn hard to get to that point, put in days of work unending that looking back I did not know we were capable of. It makes those Tuesdays all the better.

This adventure has become for us ' a pursuit where the quality of our time is much more important that the quantity of our possessions'.

We are rich to some, dirt poor to others. In our hearts we know which is the truth.

When your life, your time and your soul become one you will know the off the grid meaning that is right for you, that you are on the right track towards 'living off the grid'.

Living Off Grid Our Early Years

How The Weather Affects Living Off The Grid

Getting Started Off The Grid