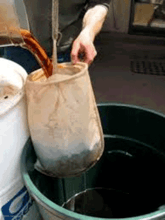 If all those 2.9 billion gallons could be recycled and applied to replace the energy equivalent volume of oil (an ideal case), nearly 1% of US oil usage could be offset. Make use of used vegetable oil as a direct fuel competes with a few other uses of the commodity, which has consequences on its value as a fuel and raises its price as an input to the other uses as well One Man's Waste Oil is Another Man's Fuel

Yes, that's great, but how do you collect it?

A lot of people think (Myself included) that obtaining the waste oil is the hardest part. Back in the day, you could get all the WVO you wanted simply by asking. Now that waste vegetable oil has become a commodity, it's different.

There is a whole section devoted to this topic in the free membership area so I'm only going to touch on it here.

There are three main avenues of approach:

Snack Food Companies: If you have a snack food company in your town, you might be in luck. They usually have large volumes of WVO on hand. Most of the time it is sold to waste oil haulers but even a small amount from these guys can keep you in waste vegetable oil for months.

Also many of these companies don't dispose of their WVO on a regular basis. So you need to be in a position to handle possibly 100's, if not 1000's of gallons of waste oil at once. Restaurants: This is where most people go, and it is still possible to score WVO on a regular basis. If it is a chain restaurant chances are they have contracted with a waste oil hauler. Under no circumstance should you WVO that belongs to the waste oil haulers. It's bad karma and it's also grand theft.

Having said that there are still plenty of small local restaurants who aren't "on the payroll" so to speak. These places are nice because the owner is usually on premises and you can easily talk to him if you go in as a paying customer. Be polite, be professional. Compliment the food, or service, and ask what he does with his waste oil. The answer might surprise you. Fairs and carnivals: This is my favorite method. During the summer time there are usually 100's of small fairs, street fairs, state and country fairs, all over. most of them sell fried food. They haul in their oil in 5 gallon containers. They also have to haul the used oil away.

Here's what you do: Show up around closing time and offer to get rid of it for them. They are usually tired, hot, they've (hopefully) made money, and usually in a pretty good mood. Strike up a conversation and maybe crack a beer or two. The best part is sometimes the fairs last a few days so you can go back and pick up more oil. Tell them what you're doing with the oil. watch them become interested.

As a bonus method, if you're friendly with your neighbors ask them to save their oil. Many people these days are using turkey fryers and many households consume a gallon or more or WVO or waste vegetable oil oil a week.